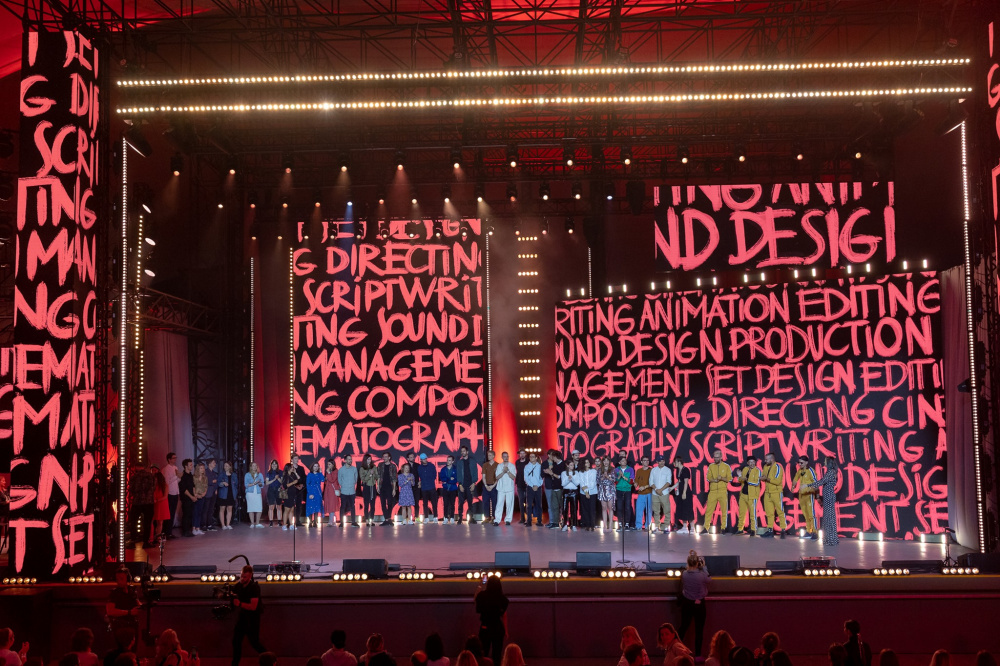 The final of the 8th edition of Papaya Young Directors is behind us. The jury of this year's competition awarded 5 prizes, 4 distinctions and 4 special prizes. Additionally, the Audience Award winner was chosen by online voting. The statuettes were handed out on 2nd July during the ‘Finally’: Gala in Sowiński Park, and coverage of the gala could be watched live in selected places in Poland and selected European cities.
The competition’s Grand Prix, as well as the award for the Best Film in the Music Stories category, was won by Marcin Kluczykowski for the video “Zabawa” (Fun) to the song by Krzysztofa Zalewskiego (Catz ‘N Dogz remix). The director intertwines grotesque horror and comedy in an almost 5-minute-long video, co-creating a visually interesting concept with the music. As the jury commented: "This work, from explication to production, was the most conceptually coherent, required the least feedback, and in the end, it surprised us the most with its refined and thoughtful form in every cinematic element".
An additional Distinction - for editing this awarded music video - was received by Miron Kundzicz. Among the films in this category, the special Panavision Award for Best Cinematography was awarded to the cinematographer - who also directed the video for Kayah's song “Czarna Niedziela” (Black Sunday) - Michał Sierakowski.
In the category Vertical Branded Stories by Facebook the first prize went to Mariana Martinez for the film for Durex: “Trampoline”. The clip, in a creative and humorous way, conveys the often overlooked and underestimated taboo related to choosing the right size of condoms. "Trampoline" also received the special Lunapark Prize. The film was recognized for presenting an ordinary moment that metaphorically captures people's struggles in this area of life.
The film “Bedtime Stories” dedicated to Durex, directed by Jiri Horensky, won first place in the Branded Stories category. Referring to the film’s title - the director shows various shades of intimacy, presenting sex as something much deeper than just a physical connection. The jury appreciated the director's exceptional sensitivity, in showing diversity and multiplicity of needs along with numerous dimensions of pleasure, as well as a remarkable journey that allows us to feel sensuality in various forms. The sensitivity in working with actors was also emphasized, which resulted in an experience of real intimacy on screen.
The Branded Stories category abounded in awards and distinctions this year. The special Heliograf Award for remarkable visual sensitivity in directing and cinematography went to Mikołaj Piszczan, Miłosz Sawicki and Stefan Żółtowski for the film “Pics or it didn’t happen” made for SAMSUNG. This award was also given to Zuzia Sorówka and Paweł Grabarek for their film for Durex “Wolność
na naszych zasadach” (Freedom on Our Own Terms)
Distinctions in Directing were awarded to Nils Hansen for the Audioteka spot: “A Forgotten World” and the duo Ola Hulbój & Michał Toczek for the film “Żyłka czy plecionka?” (Fishing) made for Tyskie.
The Best Film in the category - which is making its debut this year - Vertical Women’s Stories by Facebook, was the animated film “Chained” directed by Bara Halirova. This short 2D animation eloquently presents the mission of the Kuchinate collective, which helps African women seeking asylum in Tel Aviv. It’s a film showing a woman's path: from losing her own home, through despair, the need to overcome fear, and finally, finding help in a new place where she can rebuild her sense of security as she finds her circle of support. The jury emphasized, “skillful use of vertical frames that complete the story presented on the screen”. The animation is handcrafted, in contrast to the usually fast-paced videos for Stories. This precision and attention to detail captivated the jurors, and the creator proved that you can create Art in social media with a capital A."
The ATM special award for Best Production was awarded to the duo: Karolina Fronik & Nadia Szymańska for “Lekcję historii” (History Lesson) created for the Kosmos for Girls Foundation. Miłosz Sawicki, Karolina Fronik and Nadia Szymańska received a Distinction for casting and working with actors on the same production.
The Audience Award went to Gabriela Baran i Mieszko Hajkowski for the film for DPD “Dotarło? Dotarło!” (Got it? Got it!)".
This year, 1,248 people entered the Papaya Young Directors competition - 573 more than in the previous edition. Artists sent as many as 1,645 works, 30 percent of which came from abroad - including Portugal, Germany and France. 31 works got to the final stage, which were evaluated by over 100 representatives - including representatives of advertising agencies and specialists from the world of film, culture and art.
We use cookies to ensure that we give you the best experience on our website. This includes cookies from third party analitycs system. You can change your cookie settings at any time.
Find out more
Accept